The Spectacle of the Resurrection 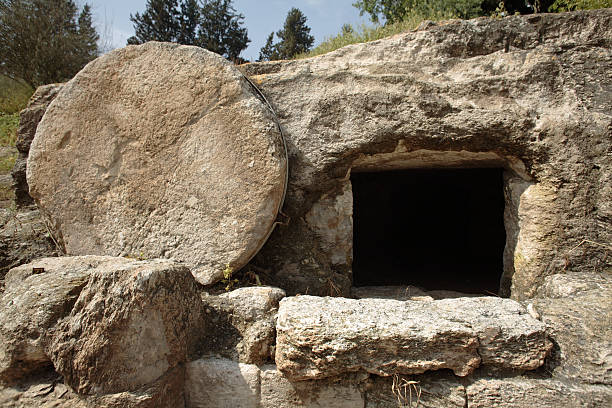 Luke 23:44-48 44 It was now about the sixth hour, and there was darkness over the whole land until the ninth hour, 45 while the sun’s light failed. And the curtain of the temple was torn in two. 46 Then Jesus, calling out with a loud voice, said, “Father, into your hands I commit my spirit!” And having said this he breathed his last.47 Now when the centurion saw what had taken place, he praised God, saying, “Certainly this man was innocent!” 48 And all the crowds that had assembled for this spectacle, when they saw what had taken place, returned home beating their breasts.

The Hour had come, the light of the world was snuffed out, leaving the world in utter darkness and hopelessness.  “There was darkness over the whole land until the ninth hour, while the sun light’s failed,” (Luke 22:44). Even the creation itself groaned and lowered its head in sorrow over this gloomy day.  The brightest star over our green earth failed to shine forth its bright light.  The darkness of this Friday night touched the very cosmos created by the Savior who died for its reconciliation (Colossians 1:16, 20).  In this darkness we wait for a new and glorious day when the bright sun of the resurrection will shine forth the good news of glorious victory.  But first we sit in the darkness.

Perhaps the scripture could provide no better word for the perplexity of the last hours of Jesus’ death than the word spectacle.  The crowd had assembled for this spectacle, this unusual sight and odd occurrence. The dialogue between the two criminals on the crosses on either side of Jesus draws out the spectacle of the crucifixion.

One of these criminals “railed at him saying, ‘Are you not the Christ?  Save yourself and us!’” (Luke 23:39).  Part of this spectacle comes from the true identity of this Suffering Savior as the Christ, the powerful and reigning King who has the whole world under the grasp of his authority.  Surely this Suffering Savior can deliver Himself, the other criminals, and especially all others who suffer under unjust suffering (unlike these criminals who justly deserve their punishment).  This perplexes us to see one of such great prominence, power, and authority, simply submit himself to such immense suffering, shame, and separation from the Father’s love. Many of us in his position and with his power would have used it to save ourselves and maybe others around us, but Jesus suffered to the point of death, for our sins.

This Suffering Savior, Jesus Christ, “has done nothing wrong,” (Luke 23:41). Surely the crucifixion of Christ vividly demonstrates that, “Christ also suffered once for sins, the righteous for the unrighteous, that he might bring us to God, being put to death in the flesh but made alive in the spirit,” (1 Peter 3:18).  What greater spectacle has the world ever seen than this one in Jesus: the righteous, innocent and perfect one died in the place of the unrighteous, guilty and imperfect.

This spectacle was so great that not only did the sun turn to darkness, but the curtain of the temple was torn in two.  Behind this curtain the High Priest entered once a year to make a forgiving sacrifice for the sins of the Israelites.  This was the most Holy Place, the throne room of God where definitive justice was paid on behalf of the sins of the people.  The book of Hebrews reminds us that because the Suffering Savior shed his blood as the ultimate sacrifice for our sins, “we have confidence to enter the holy places by the blood of Jesus, by the new and living way that he opened for us through the curtain, that is, through his flesh,” (Hebrews 10:19). Because Jesus’ body was torn by his suffering and by the nails which bore into his flesh for our sin, the curtain of separation has also been torn.  We now have the assurance of entering into God’s Holy presence because of this Spectacular Savior.  What a wonderful spectacle: the King has died for our sin, our salvation, and our resurrection.

Let us wait this Saturday in the darkness of Jesus’ death with hope that Sunday is coming.  The sun will rise tomorrow morning to an even greater spectacle than the one displayed on Good Friday.  The one we crucified and killed by our lawless hands, “God raised him up, loosing the pangs of death, because it was not possible for him to be held by it,” (Acts 2:23-24).  It would be scientifically impossible for any of us mere humans to break the bonds of death, but on Sunday our Resurrected Savior will rise.  Here is the greatest spectacle to enter the cosmos:  Our Resurrected Savior will break the strongest law of the natural order, the law of death and decay.  He will do this for our sin, our salvation and our resurrection.  And one day we too will be with Him in paradise. Come Lord Jesus come!

More in Preparing For The Lord's Day

Pastor’s WSC #104: What do we pray for in the fourth petition?

Pastor’s WSC #99: What rule hath God given for our direction in prayer?

Pastor’s WSC #89: How is the Word made effectual for salvation?

Pastor’s WSC #84: What does every sin deserve?

Pastor’s WSC #79: What is the tenth commandment?

Pastor’s WSC #74: What is required in the eighth commandment?

Pastor’s WSC #69: What is forbidden in the sixth commandment?

Pastor’s WSC #64: What is required in the fifth commandment?

Pastor’s Devotion: The Lord’s Prayer (For Thine is the kingdom, and the power, and the glory forever

Pastor's Devotion: The Lord's Prayer (Thy Will Be Done)

Pastor's Devotion: Apostles' Creed (The Resurrection of the Body)

Pastor's Devotion: The Apostles' Creed (The Work of the Holy Spirit-1)

Connect and Grow: Children's Ministry and Club 56 (Fifth and Sixth)

Connect and Grow: Youth and Homebuilders

Connect and Grow with Rivermont EPC

Going Deeper in the Order of Salvation

The Spectacle of the Resurrection